I look at the party England have selected for their test tour of Sri Lanka, and am overall unimpressed.

The England test squad for January’s visit to Sri Lanka has been announced today and it is a curate’s egg of a selection. Here it is: 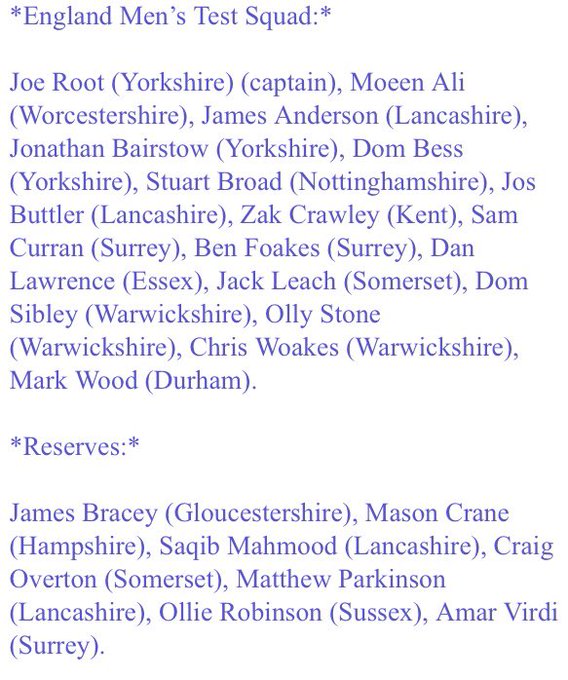 ISSUES WITH THE SELECTIONS

Rory Burns is missing because his wife is about to give birth, and Stokes among those being rested. No issues with those two omissions. However, Jonathan Bairstow should be nowhere near selection for an England test squad, likewise Moeen Ali, who was never actually that great, and has not done anything in red ball cricket for some time. As I indicated in my previous post making my own picks I would also have left out the veterans Broad and Anderson as neither have great records in Sri Lanka and this tour should have been used to experiment. I would also have left out Dom Bess. James Bracey should be in the main squad, not listed as a reserve, ditto Matthew Parkinson and Amar Virdi.

On the plus side, Stone and Wood are both in the main squad, as is Daniel Lawrence. I am also glad to see that Ben Foakes is there, although whether he actually gets selected remains to be seen.

Three of the official reserves, Craig Overton, Ollie Robinson and Mason Crane should not have been picked, Overton and Robinson because their bowling methods are unsuited to Sri Lankan conditions, Crane because he is a proven failure at the highest level, and England needing to be looking forward not back.

This England party has been picked with eyes fixed firmly on the past. From the players listed in the main squad and the reserves I would pick as my starting XI for a match in Sri Lanka: Dom Sibley, Zak Crawley, James Bracey, *Joe Root, Daniel Lawrence, Chris Woakes, +Ben Foakes, Sam Curran, Mark Wood, Jack Leach and Matthew Parkinson. This combo is a little light on batting with Woakes and Foakes at six and seven, but absent Stokes it is the only way to accommodate a back up seam option while still playing two genuine front line spinners, and Sri Lanka tends to be a place where games are fairly high scoring, so I err on the side of having more bowling options, as that is where the principal difficulty is likely to be.

I have indicated that I would start with Leach and Parkinson, with Virdi as a back up spinner. Lewis Goldsworthy, an all rounder who bowls left arm spin, may well be worth a pick in the not too distant future, if he can build on his good showing for England U19s. Liam Patterson-White has made a promising start to his career at county level. Finally, there is the radical option I have touched on previously: give Sophie Ecclestone a chance to play alongside the men. The spin bowling cupboard is not massively well stocked at present, although a few youngsters besides those I have named have made appearances at county level, but even in its current state it does represent a reason for bringing back average performers (Moeen Ali at test level) or worse still proven expensive failures (Mason Crane).

Overall, while acknowledging that they faced difficulties due to various players not being available, I have to say that the selection of this touring party represents a clear failure on the part of the selectors. I award them 3 out of 10.

I finish as usual with some of my photographs: