A look at each of BBL10, AusvInd and SLvENG (preview), including a mention of Claire Polosak’s history making involvement at the SCG, plus a link to a superb thread about Kohli, Smith and Williamson and my usual sign off. 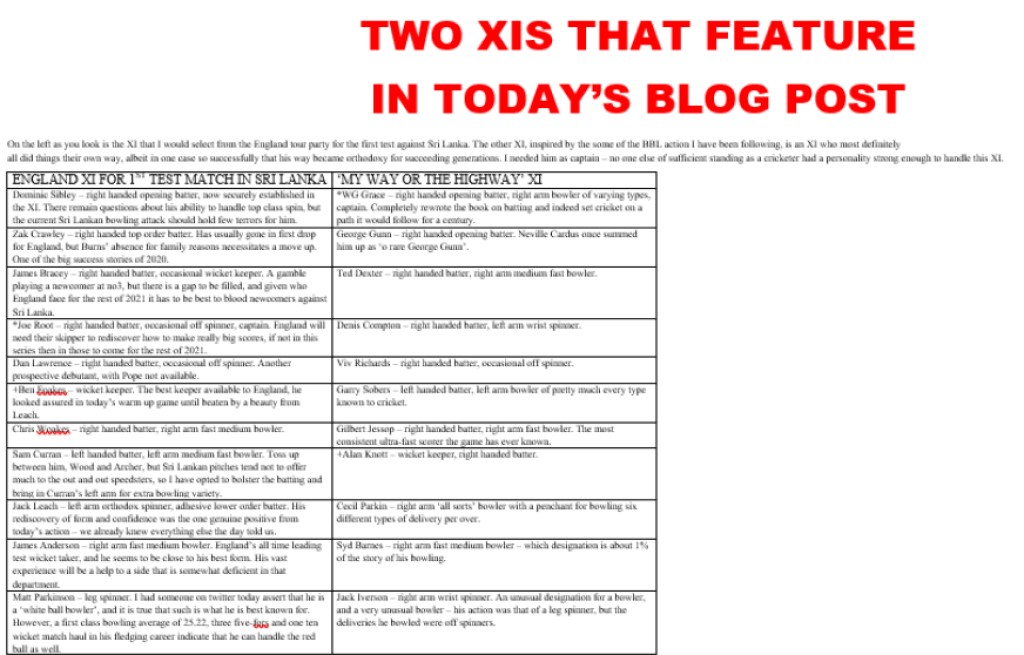 There is a massive amount of cricket going on the moment, with the Big Bash League in full swing, Australia locked in battle with India in the test arena and England engaged in an intra-squad tussle as a warm-up match before their test series in Sri Lanka gets underway. This post will therefore be a long one.

Australia managed for the first time in the series to get a respectable first innings score on the board. However, they have plenty of cause for concern nevertheless. 338 is not commanding on a decent batting pitch, and 284 of those runs came from just three players: Smith 131, Labuschagne 91 and debutant Pucovski with 62. India were 96-2 by the end of the second day, and it should develop into a fine game. Ravi Jadeja, whose selection some were questioning, bagged four wickets with his left arm spin and also made an extraordinary run out when he had one stump to aim at from 45 metres, and hit it. Inexcusably, no Indian fielder had got into a position to back the throw up, so it was hit or bust for Jadeja, and he hit. Much of day 1 was lost to rain, which is why the run aggregate looks small for two days play. This match is also significant for the fact that the 4th umpire is Claire Polosak, the first female to officiate in a men’s test match. At the age of 32, she has many years left in which to rise further up the officiating pecking order.

There has been some excellent action in the Big Bash League lately. Today’s game between the Strikers and the Renegades was one of the best games of the tournament, the Renegades getting home with one ball to spare. Renegades also won the Bash Boost point, gaining the full four points. However, even with the rather generous qualifying arrangements in this tournament (the top five go through to the knockout stage, and only eight teams are involved), Renegades remain seven points adrift of a qualifying slot with only five games to play. All of the other seven teams have realistic chances of continuing their involvement. Personally, for an eight team, single group, tournament I would allow just three teams to advance, and incentivize top finishers by arranging the mini-knockout as follows: the group winners go straight into the final, while second place take on third place in an eliminator, with second place rewarded for their own greater success in the group by being given home advantage for that match. With five teams qualifying you do not have to do that well to get through (even Renegades, though rank outsiders, are not completely out of contention yet, and the best they can finish with from their 14 games is won seven, lost seven, an exactly even record, and not one that IMO should have a chance of being rewarded with qualification).

There have been some very individualistic talents on display in the BBL, which set me thinking about a team of players who were uncompromising in doing things their own way. This was my chosen selection:

Two honourable mentions: Johnny Wardle, a master of all forms of left arm spin, but lack of space combined with the presence of Sobers and Compton induced me to not pick him. Derek Underwood’s unique left arm slow/medium bowling was something I would have liked to feature, but not at the expense of Parkin or Iverson who were the only two I could have dropped for him.

Today England started an intra-squad warm up match, over two days, with each side to bat for fifty overs in the 1st innings and then events to take their course. We have learned little new from today: Ollie Pope, who will not be playing in the test as he is not fully recovered from an injury, bats better with one good shoulder than most of his colleagues with two, which is no great surprise, and the ultimate ‘dog bites man’ story, James Anderson can take wickets anywhere. There was one genuine positive though, Jack Leach relocating form and confidence. The delivery with which he accounted for Ben Foakes was a beauty. This is the XI I would be picking for the first test, limiting my supplementary notes to the controversial selections:

This team is a little light on batting, with Foakes at six and Woakes at seven, but Sri Lanka do not have a great bowling unit – they have just been harshly dealt with by South Africa. The bowling offers great variety, with Curran and Anderson to share the new ball, Woakes as a third pace bowling option and two contrasting front line spinners, with Root’s occasional tweakers as a sixth option if needed.

This twitter thread about the batting of that great trio Kohli, Smith and Williamson was created by allthingscricket, and I recommend you read it in full by clicking here. Screenshot below:

Before my usual sign off, I have a petition to share. This one is open only to UK residents, as it is on the official UK government petition site. It calls for students to be excused some of this year’s tuition fees, as they are not getting what they pay for, since they are quite correctly not able to be at University at present. Click here to sign and share. Screenshot below:

Now it is time for my usual sign off…