An account of today’s BBL10 ‘Knockout’ between Thunder and Heat and a few comments about issues relating the tournament that were in the spotlight today. 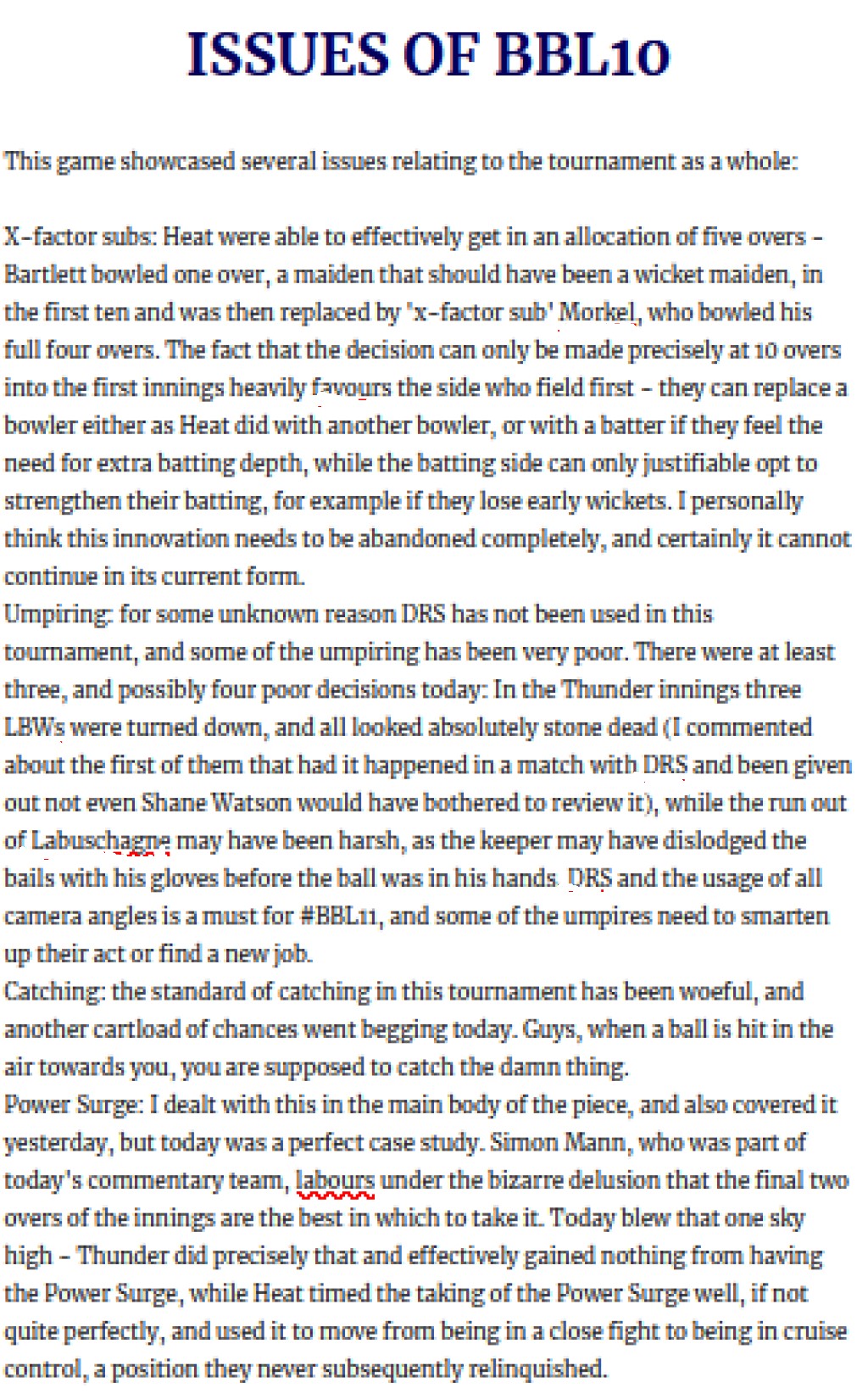 This post is devoted to today’s #BBL10 ‘Knockout’ game between Thunder who finished third in the group and Heat, who finished fourth and then beat Strikers in the ‘Eliminator’.

Thunder got away to a slow start, only managing 22-1 in their four overs of Power Play. The seventh and eighth overs of their innings were both big ones, yielding 13 and 14 respectively. Khawaja fell in the ninth to make it 62-2. At the end of the tenth Thunder were 68-2, and in need of a big second half to their innings. The second half started slow, and the dismissal of Ferguson made it 74-3 at the start of the 12th. It was 78-3 at the end of 12th, and then 11 came off the 13th over to make it 89-3. At this point the Power Surge should certainly have been claimed in a bid to maintain the momentum, but Thunder did not do so, and a wicket fell in the 15th, with the Power Surge still unclaimed. At the three-quarter way stage Thunder were 107-4, and overs 11-15 had yield 39-2, respectable, but not enough after the slow beginning. Thunder still refused to claim the Power Surge, and by the 18th they were 134-6, and now had to use the Surge for their last two overs. They had a nightmare start to this final phase, losing wickets off the first two balls. The rest of it went OK and they finished with 158-8, nine runs less than the Scorchers had spectacularly failed to defend at the same ground yesterday. The Power Surge overs had yielded 24-2, but they would probably have managed that many from overs 19 and 20 even without them being the Surge overs, so basically because they were scared to take the Power Surge early they did not benefit from it at all.

A SLOW START FOR HEAT

Heat lost two wickets, including the man with the best twitter ‘meme team’ in the business backing him, Joe Denly. 10 off the fourth over saw them end the Power Play at 25-2, three runs ahead but one wicket behind Thunder. Overs 5-10 were slow going as well for the Heat, and that the half way stage they were 56-2, needing 103 off their last 10 overs for the win. They were building towards a good moment to take the Power Surge when Labuschagne was run out for 30 to make it 70-3 after 12 overs, 89 needed off eight overs to win. Sam Heazlett who had come in at the fall of the second wicket and was already going well was joined by Jimmy Peirson, setting the stage for…

After 14 overs Heazlett reached 50, having taken 37 balls to get there, with Peirson going nicely as well, and the score was 96-3, 63 needed off six. The 15th over went for 15, taking the score to 111-3, four runs and 1 wicket ahead of Thunder at the same stage, and now Heat managed something that had proved beyond Thunder: taking the Power Surge at a sensible time (I would have gone an over earlier, if not two, but at least they did take it with Heazlett and Peirson both still there). Heat took 26 off their two Power Surge overs without losing a wicket (only two runs more than Thunder, but two fewer wickets lost, and crucially a net gain of approximately ten runs compared to two non-surge overs at the same stage of the innings), and with three overs to go they were 137-3, needing 22 off 18 and now heavy favourites. Ten more runs of the 18th reduced the ask to 12 off 12 balls, and the match was practically unloseable. The 19th over nearly finished it, but the final ball of it, with scores level, was a dot, leaving Heazlett on strike for the start of the 20th, to complete the ‘Sambulance rescue’. The first ball of the 20th was put away for four by Heazlett – no deliberate wides this time! Heazlett had scored 74 not out of 49 balls, and his supporting act Peirson had 43 not out off 24 balls. Their match turning and ultimately match winning stand had produced 92 runs in 7.1 overs. Heat face Scorchers on Thursday, with the winners to take on Sixers in Saturday’s final, and given yesterday’s events I will be rooting for the Heat, who if only for their better handling of the Power Surge thoroughly deserved their win.

This game showcased several issues relating to the tournament as a whole:

One thought on “‘Sambulance Rescue’ Act”