I pick my England XI (constrained by the squad from which it will be picked) for the first test match v India which starts on Wednesday. 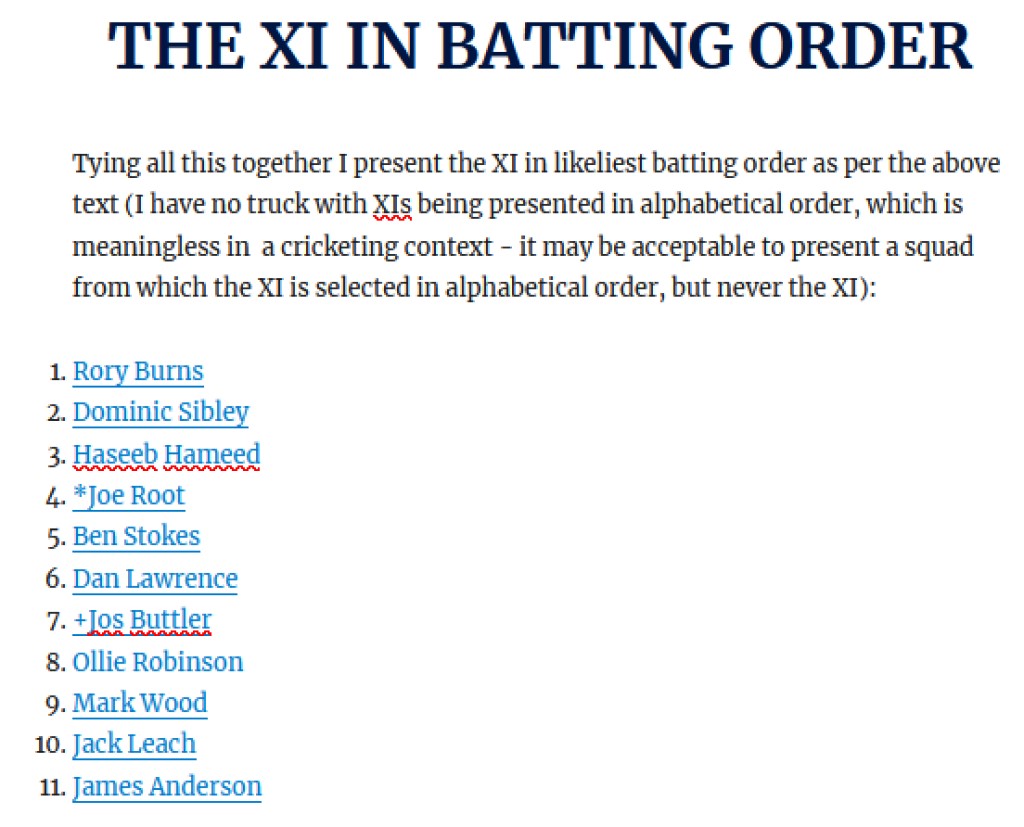 The first test in the England v India series for the Pataudi Trophy (The senior Nawab of Pataudi, Iftikhar Ali Khan, played for both England and India, playing for the former in 1932-3 and the latter in 1946 when he was captain, while his son, Mansur Ali Khan, played for India) starts on Wednesday. With that in mind I devote this post to selecting an England XI for that match. The squad from which the XI has to be chosen can be viewed here.

The openers are open and shut – Burns and Sibley will occupy those slots. On the face of it there are several options for no3: Zak Crawley is the incumbent, Jonathan Bairstow has batted there in the past and Haseeb Hameed, in good form at the moment and with a century for a County Select XI v The Indians under his belt into the bargain would also be a logical choice. Restricting ourselves to these three, Crawley is in no sort of form and has played only one major test innings, the 267 against Pakistan which is receding ever further into the past. Bairstow’s recent test record is dire – since the start of 2018 he averages less than 25 at that level. Therefore, with the most obvious candidate for England no 3, Tom Abell, injured at present I go with Hameed, reckoning that he and Sibley are in a bat off for who opens alongside Burns once Abell can come into the side.

Numbers four and five are clear cut, Root and Stokes. Number six is between Pope and Lawrence, and is a very close call. I plump for Lawrence – Pope at test level has developed an unfortunate habit of making impressive starts but then getting himself out before he manages a significant score. At no7, and keeping wicket in the absence of the injured Foakes, is Jos Buttler.

There are two logical candidates for no8, Ollie Robinson and Sam Curran. Although the latter’s left arm creates an extra bowling variation I plump for the former because I see him as more likely to take wickets at test level. At no9 I opt for Mark Wood, the only express pace bowler in the squad, and as such an automatic pick for me. Number 10 and sole specialist spinner is Jack Leach, who is the only serious candidate for that role at present (although there are some promising youngsters starting to emerge at county level). Rounding out the order is England’s all time leading test wicket taker, James Anderson. My feeling is that it would be foolhardy to select both veterans in the first match of a five test series, and I opt for Anderson ahead of Broad (the latter will then get fired up by his omission!).

THE XI IN BATTING ORDER