A review of Rachel Caine’s series of books featuring the Great Library.

There are three novels under consideration in todays post, and they form a series. 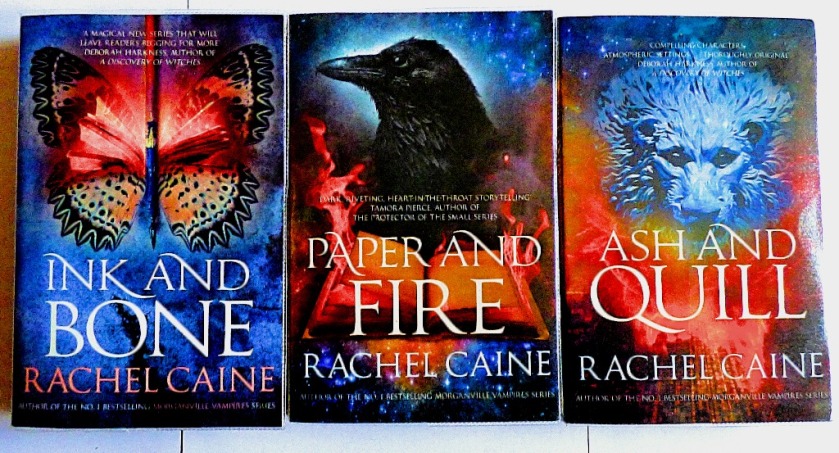 These books are an exercise in “Alternative History”. They are set in the 21st century in a world in which the Great Library of Alexandria did not get destroyed, but instead ended up as a global power, not merely a centre of learning. For some centuries a conflict has raged between the forces of the Library and rebels known as Burners. Also, since the Great Library have decreed that no books shall be privately owned there is a third group in the mix, the smugglers who for a price satsify the cravings of those who in defiance of the law still want to own books.

In the opening pages of this book we meet Jess Brightwell, then 10 years old, and already running contraband books as part of his father’s smuggling business. Jess performs a mission which leads him to an encounter with an ‘ink eater’ – a man who in this instance eats the pages of the only known copy of a book by Aristotle. The effect witnessing this has on Jess sets the scene for the subsequent story. We skip forward six years and Jess’s father has entered him (at vast expense) for the Great Library entrance exam, considering that it would be useful to have someone on the inside. Jess manages to pass and finds himself bound for Alexandria along with 30 or so other scholars. Among his fellows are Thomas Schreiber, a German with massive talents for engineering and inventing, Khalila Seif who has achieved the first ever perfect score in the entrance exam, Glain Wathen, a tough Welsh girl who has an eye on a place in the High Garda, the Library’s security force/ army and Dario Santiago, from a wealthy and influential Spanish family.

These and the other postulants find themselves being put through their paces by Scholar Christopher Wolfe, a very harsh judge. Twelve of the postulants have gone by the end of the first week, and their numbers continue to fall regularly. One new person arrives on the scene, Morgan Hault, who it turns out is an obscurist, and as such vital to future of the library. Her unwillingness to suffer the obscurist’s usual fate of being confined in the Iron Tower is one of the causes of conflict between these scholars and the Library. The other direct cause is Thomas Schreiber’s passion for inventing – he designs and creates a printing press which would enable the bulk production of books, not realising that various previous scholars have been harshly punished for the same invention, as the Library will tolerate nothing that might reduce its power. It further harms Thomas’ cause that Christopher Wolfe is one of those scholars who have previously been punished for this offence.

Before Thomas  Schreiber gets hauled over the coals there are major clues that all is not rosy in the garden. As a final exercise the postulants are sent to Oxford to retrieve some rare books gthat have come to light there, and the only way to get them there in time is to use a technique called ‘translation’, which is fraught with danger. One of them, Guillaume Danton, dies while being translated, which generates suspicion. Then, when they have barely escaped from Oxford with their lives and are being returned to Alexandria on the Archivist’s personal train they are ambushed by Burners who have somehow found out their whereabouts.

This book ends with Morgan Hault confined in the Iron Tower, Thomas Schreiber in prison, with the others having been told that he is dead, and all the other main characters having been assigned various positions.

This book follows on directly from the end of book one. It deals with the discovery that Thomas is not dead, merely in prison, and the subsequent quest to break him out and escape from the Library’s clutches. In the Iron Tower, above the levels occupied by the obscurists, the Black Archives are revealed to us for the first time. The Archivist (boss of the whole library) has ordered the Artifex Magnus to destroy them, but the rebel scholars get away with a quantity of the most important books and head for London, Jess Brightwell’s home town. They then find themselves betrayed and sent to the Burner city of Philadelphia. It is also in the course of this book that we see how the automata (I dropped a hint about these in this post)  that the Libfrary uses in addition to the High Garda can be switched off. Thomas, with the help of Morgan Hault the obscurist, manages to change one of the automata so that it works for them.

Thomas Schreiber creates a version of his press from materials available in Philadelphia, which works sufficiently well to impress the Burners but not to end his usefulness. He also makes a weapon that will ultimately be used to make a hole in Philadelphia’s walls so that he and his band can escape.

Meanwhile, having previously kept the city under siege for a hundred years, the Library having discovered that their rebel scholars are there have ordered the complete destruction of the city.

While the city is being destroyed, Thomas Schreiber’s weapon creates enough of a hole in the walls for the scholars to escape, and one of Jess’ smuggler acquaintances gets them back to Britain. London is now off bounds, having finally fallen to the Welsh forces who have been attacking it for some time, but Jess’ father owns a castle in the north of England.

While hiding there Thomas builds a sophisticated press which is immediately put to work churning out bulk copies of previously concealed works, and he also creates a better version of the weapon he used in Philadelphia to make a gap in the walls. The book ends with Jess, disguised as his brother, about to visit the Archivist. It is fairly clear that whatever happens in that meeting only one of those two will emerge alive (at most).

Interleaved with the story proper are regular sections titled Ephemera, which give as insights in to the history and development of the Library. We learn through these, and through discoveries in the Black Archives, that the first Archivist with a view to making the Library a military as well as an intellectual power base (“using the sword as well the pen”) was Zoran who saw in a conflict between the Roman emperor Aurelian and the eastern queen Zenobia the opportunity to bring this about, that the first scholar to suggest a printing press was a Chinese man in the year 868, and the scholar Gutenberg was punished for the same “crime” some six centuries later. Thus we can trace the corruption of the Library, and the view that its power counted above all else back at least to 868AD, almost 1,200 years before the action in these books takes place, and possibly all the way back to the scheming Archivist Zoran half a millennium before that.

These books are excellent, the story being thoroughly gripping. Although a couple of minor errors slipped in to the history (“Scholar Plato”, which reference is made during the story is incorrect, since he lived and died before the Great Library was created, and Archimedes of Syracuse lived a century and more earlier than Heron of Alexandria, not vice versa) they are not sufficient to detract from the overall quality of the work, which is excellent. I really enjoyed reading these books and hope that there are more to come. You can find out more about Rachel Caine from her website and on twitter. Also, shrewd observers will have noted that my pictures are of Library books, so I finish this long post about a library system that went badly wrong somewhere along the line by thanking a library system that is still working nicely, Norfolk Libraries, through whose good offices I gained access to these books.