Some stuff about upcoming auctions and press coverage thereof and the solution to my most recent mathematical teaser.

This post deals with some of my work at James and Sons and also includes a solution to a problem I posed last week.

In my recent post about James and Sons’ upcoming gold coin and proof set auction I included a copy of the official press release I had put out about it. What I did not mention in that post is that we also have a less significant ajuction coming up this Monday, for which I had also out out a press release. Both are reproduced below to set the scene for what follows: 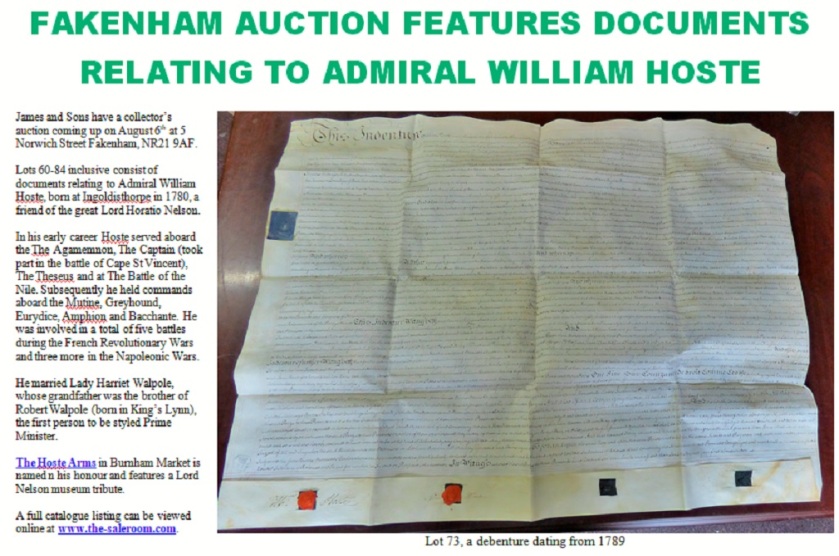 On Thursday morning I checked into the James and Sons twitter account and was delighted to spot a link to an article in the Fakenham and Wells Times (part of the Archant stable and therefore connected to the Eastern Daily Press) about the coin auction. Below is a scan of the print version of this article:

Then yesterday morning brought more positive news – a link to an article in that day’s Lynn News about Monday’s general collector’s auction. The focus of this article is some documents we have relating to William Hoste, after whom The Hoste in Burnham Market is named, and who was a protege of Lord Nelson and connected by marriage to Robert Walpole. Here is a scan of the print version of this article:

We have another auction in preparation, and I have already pretty much decided that this 19th century presentation conductors baton (it is too large to have been intended to be used) will be the feature image in the press release for that one:

Here is the problem I set last week, followed by the answer and an official solution:

Here is a concise solution, courtesy of Chew-Seong Cheong :