Some thoughts on the recently concluded India – South Africa test series, some stuff about the environment and climate change and some photographs.

This post looks at the just concluded test series between India and South Africa, and also features a couple of other things plus some photographs.

AN APPROPRIATE  END TO AN EXTRAORDINARILY ONE SIDED SERIES

India had already settled the series by winning huge victories in the first two games, but they did not rest on their laurels. A batting performance led by Rohit Sharma (212) and Ajinkya Rahane (115) saw India rack up 497-9 declared over most of the first two days. In the last stages of day 2 they captured two cheap South African wickets. Day 3 was the day the match was settled – South Africa were rolled for 162 in their first innings and then by the close were eight down in the second with stubborn opener Dean Elgar injured and unlikely to resume his innings. The final wicket fell at the start of day 4, with Elgar as suspected not resuming his innings. The second South African innings mustered a mere 133, making the final margin a whopping innings and 202 runs.

India are traditionally hard to beat at home, but there were two factors about this series that should be seriously concerning for the rest of the cricket world:

In short not only have India made South Africa look very ordinary indeed, they have also shown massive strength in what have been historically their two greatest problem areas – fast bowling and top order batting.On fast bowling the following graphic from cricviz analyst further emphasises the point: 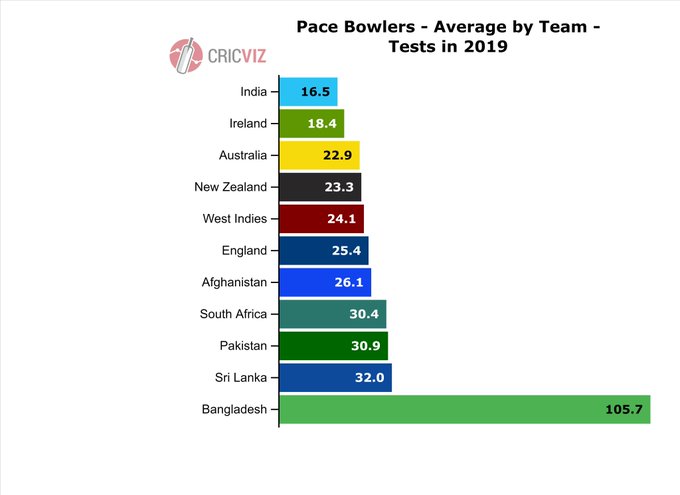 The good average recorded by Ireland’s pace bowlers was of course assisted by one of England’s most ignominious recent batting collapses (85 all out at Lord’s).

The other two matches don’t read much if any better for South Africa than this one – the first match saw India score 502-7 declared and 322-4 declared while SA managed 431 and 191, to go down by 202 runs, while the second saw India tally 601-5 declared against 276 and 189 by their opponents, for a margin of an innings and 136 runs. India in this series have thus tallied 1922-25 for an average of 76.88 runs per wicket, while South Africa have scored 1382-59, for an average of 23.42 per wicket. At the back end of 2019 India soundly beat Australia in Australia, while this summer England were more than a little fortunate to emerge from a home series against Australia with a 2-2 scoreline. The series just concluded shows that India are now even better than they were a year ago. Can England with what looks like a sensible test squad manage an impressive series in New Zealand?

I have a number of things on this important issue to share with you. I start by drawing your attention to Richard Murphy of Tax Research UK on the subject of Sustainable Cost Accounting:

Courtesy of Team4Nature here is:

The People’s #100Actions4Nature: a Response to the State of Nature Report 2019

There is a petition just started on the official site for petitions to the UK government (you have to be a UK citizen to sign) “Grant additional funds to scientists to mitigate the effects of climate change” – click screenshot below to sign and share:

Here is a map showing what The British Isles could look like in the year 2100 if we do nothing:

I end this section with a note about the London Mayoral Elections. The incumbent Sadiq Khan is failing to help himself, the Tory vote will be split between the official Tory candidate Shaun Bailey and the nominally Independent but actually thorough-going Tory Rory Stewart, which all leaves Green candidate Sian Berry (3rd place in 2016) in with a very good chance of winning the election. I have already indicated that if I had a vote then under the system used for these elections my first preference would go to Sian Berry, and my second to Sadiq Khan as an insurance policy against either Tory getting in and my message to any one who is reading this and does have a vote is to do likewise – let’s get London a Green mayor.