This an account of my day at AutismCon. It also includes pictures of every page of the program for that event, and brief snippets about my journeys each way.

Yesterday  was the day of AutismCon, an event organised under the aegis of the National Autistic Society (NAS). The actual organizing of the event was done by a committee of five, The AutismCon Committee, while the NAS’s Senior Events Officer Elly sent out emails to everyone who booked in advance so we all knew what to expect.

With the registration desk opening at 10 o’clock, I decided to get the train that leaves King’s Lynn just before 8AM. Not knowing for sure how long the ticket purchase would take I left my flat at 7:15AM to eliminate any chance of mishap (therefore, in accordance with Sutcliffe’s First Law of Travelling by Public Transport, there were no problems and I was seated on the train nearly half an hour before it was due to depart), having had time to photograph a 2016 London Underground map on the platform.

Apart from the fact that a mob of Spurs fans chose to sit in the same area where I was already seated and maintained a constant racket all the way to Cambridge, where thankfully they changed trains in preference to travelling into London and out again (I should point out this train departed on schedule at 7:54AM and several of this group had already cracked open lagers by then), the journey was thankfully uneventful.

Even fairly early on a Saturday morning King’s Cross was quite busy, so I was thankful that with the event being at Friends House I had only to head for the Euston Road and walk straight along it. This sculpture just outside the station is a new addition since my last trip to London…

Having covered the journey down, it is now time for the main course…

Registration took a little time, after which I consulted my program. To set the scene for the rest of the day, here is a close up of the schedule… 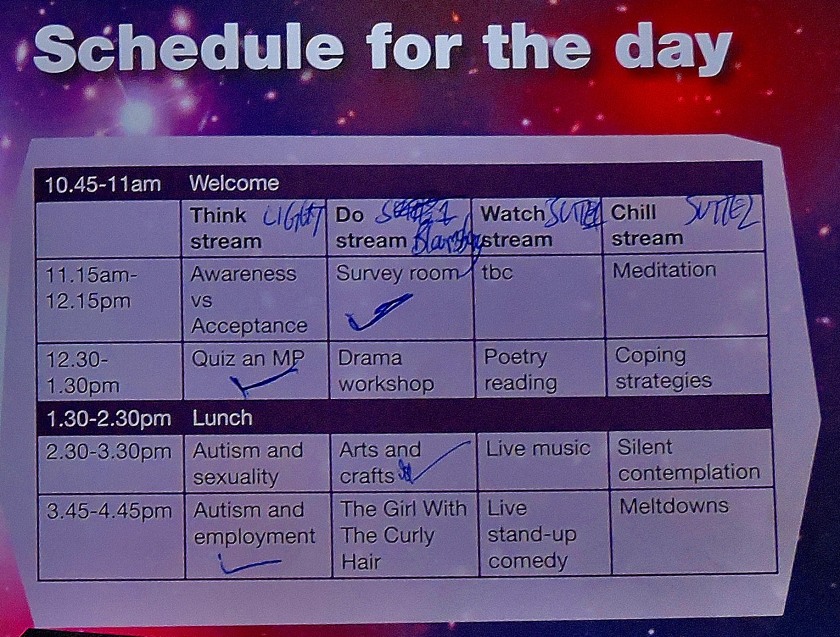 As you will find out later, I made one change to the plan indicated here. Having shown a close-up of the schedule, here is the entire program for your attention… 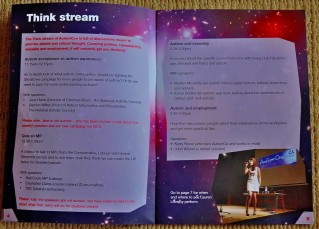 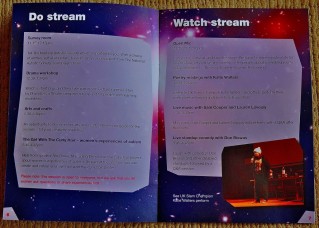 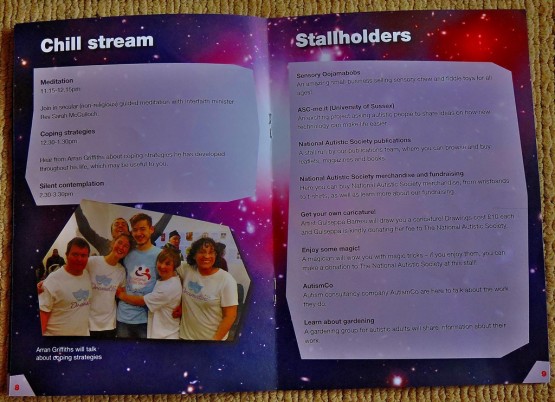 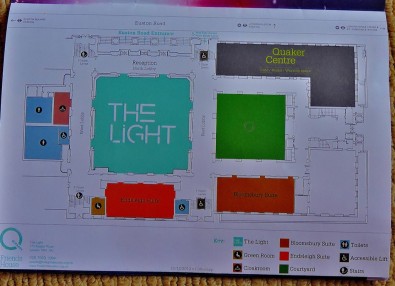 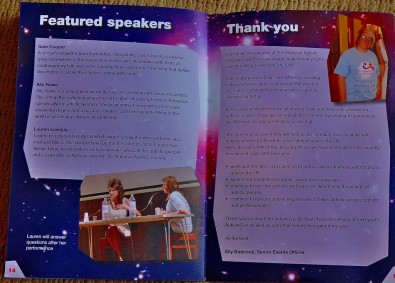 I took my seat in Light (the big room, now somewhat smaller in terms of seating area than it once was, but still with a massive capacity) for the introductory session. The biggest change since I was last there however is to the ceiling/ roof structure, from which the name derives.. 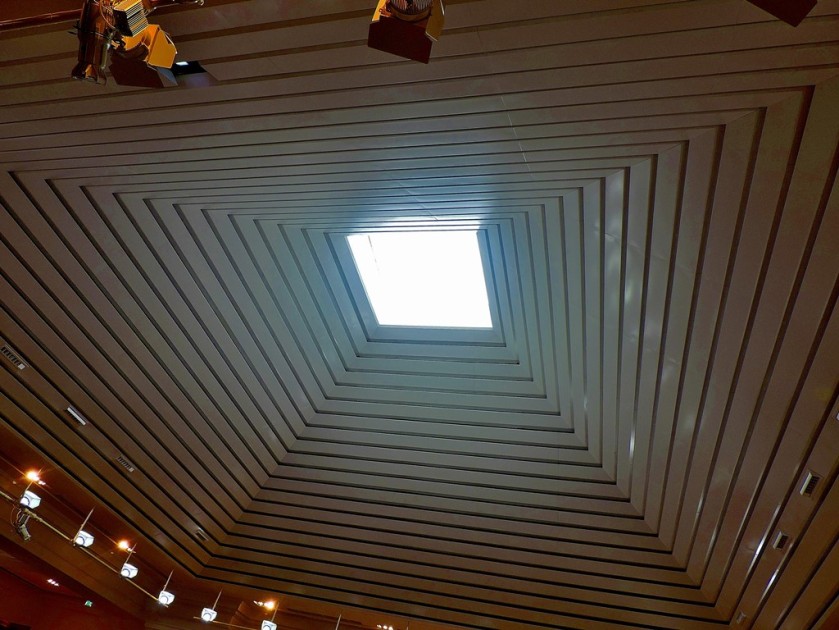 The whole event was shunted back fifteen minutes due to the failings of British public transport (not enough people had been able to get to the event for the scheduled start time). The main purpose of the introductory session was to provide a few explanations about where things were. Also, due to the severe sensory issues of some of those in attendance, applause was very firmly banned (the alternative, already standard in international sign langiuage, is ‘jazz hands’).

My first session was in the “Do” stream, taking place in the Bloomsbury Suite and was titled ‘Survey room’. There was one written and one pictorial survey per person and one could choose either or both (I chose both, and attached my details to the written survey to enable further contact to be made should the NAS wish to). Once we had had time to complete the survey there was a discussion session which was very constructive, and then the session ended.

For me, it was back to Light for sessions two, which featured Labour MP  for Bermondsey & Old Southwark Neil Coyle and Conservative Councillor Claire-Louise Leyland.

This was a very lively session, with many people from the audience using the question and answer part of it to express their hostility to the Tories (though nothing personal was aimed at Councillor Leyland, who after all had had the decency to show up for what she must have known what would be a tough session). As for why there was so much hostility to the Tories in that room, one general and two specific points can sum it up:

After the end of this session there was an hour’s break for lunch. I looked in at the Arts and Crafts session which I had initially intended going to but decided instead to head back to Light for the session on….

One point that came up several times from the floor was that autistic people who wish to transition find their autism used as an excuse to deny them this wish. This provoked an attempted response from someone who works in a gender reassignment clinic, but he was quite rightly shut down by the chair – this was a day for autistic people and he had no right to attempt to over-ride their lived experiences with his comments. At the end of this session I stayed seated because the next session I was attending was also in his room, being the one session that felt I absolutely could not miss…

This session featured John Wilson, a former solicitor diagnosed with autism at the age of 50 (I met someone during the first session who was undiagnosed until the age of 61) and Kerry Bover, who has worked part-time at Clarks for 14 years and who also runs AutismCo. 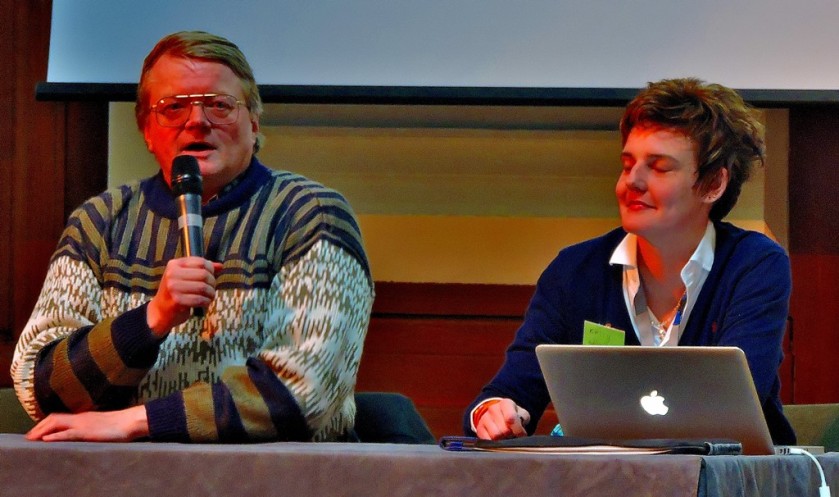 There were many stories both good and bad told during this session. It was here that I heard about the restaurant owner who when faced with a group of customers who asked not to be served by an autistic waiter not only upheld the law of the land (it was John, the trained lawyer, who brought up this story, and his opinion as regards the law the I am using) by refusing to accede to this request and supporting his employee (just substitute ‘black’ for ‘autistic’ in the request by these customers to make the appallingness of their behaviour unmissably obvious) but then subsequently put up a facebook post instructing anyone whose attitudes were like those of this group of customers not to book places at his restaurant as if they made that request he would kick them out.

For music lovers there was to be a live performance from autistic singer/ songwriter Lauren Lovejoy (apparently she was a massive hit on X-Factor in 2013) immediately after the end of this session, but for me the end of the session was also the end of the event.

AN OVERVIEW OF THE EVENT

I think that the boldness and organisational skills needed to get 600 autistic adults together in one place should be complimented. Overall, the late start not withstanding, the event was superbly run. I for one thoroughly enjoyed the day and look forward to next year’s event.

The train back to King’s Lynn left platform 1 of Kings Cross at 17:44 (not the lowest numbered – in true thermodynamic style Kings Cross has a platform 0, which I arrived at this morning). Platform 1 has a very fine clock…

Having walked the length of the platform (the train splits at Cambridge, most of it terminating there while the front four coaches go on to Lynn) I took my seat for what was thankfully both a quiet and an uneventful journey back to Lynn. It was some twelve-and a half hours after leaving the flat that I arrived home.

On April 15th NAS West Norfolk are holding a Positive Autism Awareness Conference at the Duke’s Head Hotel, King’s Lynn, for which we are sold out! After the experience of AutismCon in London I am even more enthused about this event at which I shall be displaying some of my photographs.