Christmas report on the England men’s team, and some Muscovy duck pictures.

While the England Women’s team have had a fabulous year, thoroughly deserving to win Team of the Year at the BBC Sports Personality of the Year awards (and had there been any justice Anya Shrubsole would have been Sports Personality of the Year) life has been tougher for the men. The confirmation in the early hours of Monday morning UK time that the Ashes had been lost (yes folks, I was listening to TMS right to the bitter end) lies behind this post (going up now through a combination of thinking before I wrote and work commitments yesterday). I end as usual with some of my own photographs.

Gritty fifties from Stoneman and Vince on the opening day notwithstanding Brisbane was a bad match for England. The ease with which Warner and Bancroft knocked off the 170 needed to win in the second innings, and the immovability of Aussie skipper Smith in their first innings were the most worrying sings.

Adelaide kicked off with Joe Root deciding to field first when he won the toss. An Australian tally of 442-8D in the course of the first day and a half made that decision look worse than it was (it was still poor, though not down there with Nasser Hussain at Brisbane 2002). England were then all out for 227, and as this was as a day-night test with the night session due to start it seemed mandatory to enforce the follow-on, but Steve Smith declined to do so. Australia stuttered under the lights to 50-4, and England’s best bowling effort of the series so far continued the following morning reducing Australia to 138 all out, leaving England 354 to get. England made a decent fist of things, and  at 170-3 it looked like they might just get them. Unfortunately both for England and for cricket as a whole (there are a lot of captains these days who almost automatically decline to enforce the follow-on, and had England chased down this target of 354 it might have made those people think) a wicket just before the close of day 4 and then a clatter the following morning put paid to that.

So it was on the Perth for the last Ashes game to be staged at the WACA (a new stadium just across the road will stage future Perth tests), a venue where England had only one once, way back in 1978. Precedents for a comeback from 0-2 down in a five match series are equally thin on the ground – the only successful example being Don Bradman’s 1936-7 Aussies (Bradman himself produced scores of 270, 212 and 169 in the third, fourth and fifth matches of that series, and also produced a tactical masterstroke in those days of uncovered pitches in that third test when faced with a terror track he sent in tail-enders O’Reilly and Fleetwood-Smith to miss everything until the close of that day – Bradman emerged the following day at 97-5 to join regular opener Jack Fingleton who had come at no 6, and with the pitch now eased they put on 346 for the sixth wicket to settle the issue), although 42 years earlier Australia had won the 3rd and 4th matches after being 0-2 down before England won the final game of that series.

England batted first in Perth, and at 131-4 a familiar pattern seemed to be emerging, but then Dawid Malan and Jonny Bairstow got going, and both made hundreds. Malan went on to 140. Once their 237 run partnership was broken the rest of the innings subsided quickly, but 403 still seemed a respectable total. When Australia were 248-4 England still looked in with a shout, but by the end of day 3 Australia were 549-4, Smith having set a new career best and Mitchell Marsh in front of his home crowd turning his maiden test hundred into 181 not out. Smith and Marsh both fell quickly the following morning, and Starc was also out cheaply, but Tim Paine and Pat Cummins made useful contributions, and Australia declared at 662-9, leaving England four and a half sessions to survive for the draw. By the close of that fourth day Bairstow and Malan were together once more, with the only convincing batting effort up to then having come from Vince, who played very well for his 55 and was unlucky to get an absolute brute of a ball from Starc.

It rained overnight, and the covers at the WACA proved inadequate, leaving a wet patch on a good length at one end, which delayed the start of the fifth day’s play. Root argued for an abandonment, while Smith of course tried to hasten the start of play. I fully understand why Root tried to get play abandoned, but actually I am glad he failed in the attempt – to keep a series alive in that fashion would have been deeply unsatisfactory. At Headingley in 1975 a delicately poised final day (Australia 220-3 needing 445 to win, and Rick McCosker five away from what would have been a maiden test hundred) was abandoned after protesters sabotaged the pitch (“George Davis is innocent” – according to Peter Chappell, namesake of two members of that Australian team, but not according to the courts, or his future record – released from that sentence for armed robbery, he was soon back inside for another armed robbery to which he pleaded guilty).

Once the game finally commenced it was soon obvious which way the wind was blowing, and for the third time in the space of a year (following two occasions against India last winter) England had managed to lose by an innings margin after tallying 400 first up.

Mark Stoneman: some gritty performances thus far, but he needs to start turning those fifties in to hundreds some time soon.

James Vince: to put it mildly a controversial choice for the crucial number three slot, and notwitshstanding two fine innings so far, one in Brisbane and one in Perth, he has not yet done enough to convince – see my closing comment about Stoneman.

Joe Root: would seem to be the latest in a long line of England players to suffer captaincy-itis, not only he is failing to make runs, he is getting out in un-Rootlike ways. England need his batting to be at its best, so perhaps someone else should be made captain (see later for my controversial suggestion).

Dawid Malan: his 140 at Perth and fighting effort in the second innings as well confirms his arrival as a test batsman of quality. Also, while it never looked threatening his part time leg spin was at least economical.

Jonny Bairstow: other than his first innings performance at Perth not thus far a great series for the wicketkeeper-batsman.

Moeen Ali: Fulfils a useful all-round role, although England offspinners have rarely been successful in Australia (the chief exceptions being Laker in 1958-9, Titmus in 1962-3 and Emburey in 1986-7). Also, if England do decide that Root needs to be replaced as captain to enable him to concentrate solely on what he does best – his batting – then Moeen would be my choice for the job.

Chris Woakes: Save for his bowling in the second innings at Adelaide he has not looked very threatening in this series. That game was also the scene of his only significant batting effort of the series so far. Right-arm medium fast when the ball is not deviating (and it generally doesn’t in Australia) simply will not trouble good batsmen.

Craig Overton: Looks like he belongs at this level, but my comments about Woakes’ style of bowling in Australian conditions also apply to him.

Stuart Broad: A nightmare series for him, not because he has bowled especially badly, though he has consistently been pitching it too short, but because he has looked completely unthreatening and has bowling figures that reflect that.

Jimmy Anderson: continues to climb the wicket taking charts. His 12 wickets at 25 apiece in this series, while all his colleagues have been taking drubbings is a remarkable effort in the face of adversity. I fully expect that in the early stages at Melbourne he will move ahead of Courtney Walsh in the wicket takers list (current Anderson 518, Walsh 519), leaving only Glenn McGrath among the quick bowlers ahead of him. He has bowled beautifully this series but with Broad off the boil his ‘support’ has simply not been up to standard.

THE REST OF THE SERIES

Before I get into this section let me clear that I do not believe for an instant that had the likes of Ben Stokes, Mark Wood and Toby Roland-Jones been available England would be doing a whole lot better. Certainly to be deprived of the services of three such excellent cricketers simultaneously is unfortunate but England are 3-0 down because they have been outclassed throughout this series (only in Adelaide to England ever look close to making a game of it – the Malan-Bairstow partnership in the first innings at Perth was the only other major period in the series to date in which England had the whip hand).

The good news for England is that their records at Melbourne and Sydney are better tahn their records elsewhere in Australia. While the batsmen need to score more runs, it is the bowlers who (Anderson apart) really need to pick things up – England have not yet taken 20 wickets in a match in this series, and at Perth they failed to even take 10.

I think England can pick themselves up and win at least one of the two remaining matches. In many ways it would be an injustice to Australia were England to win both and make it look respectable at 3-2 – this England side does not deserve better than 4-1 (though I also think it does not deserve worse – it is not as shambolic as Flintoff’s 2006-7 squad who really did deserve to be on the wrong end of a 5-0,  as in the end they were.

The take home message of the three matches played so far is one that England should already have learned a long time ago – a bowling ‘attack’ of four right-arm medium-fast bowlers and an offspinner will not cut the mustard in Oz.

A little while back I reported sighting some birds which turned out to be Muscovy ducks (Cairina moschata). Well, I have seen another (this time a single bird), this time in The Walks. 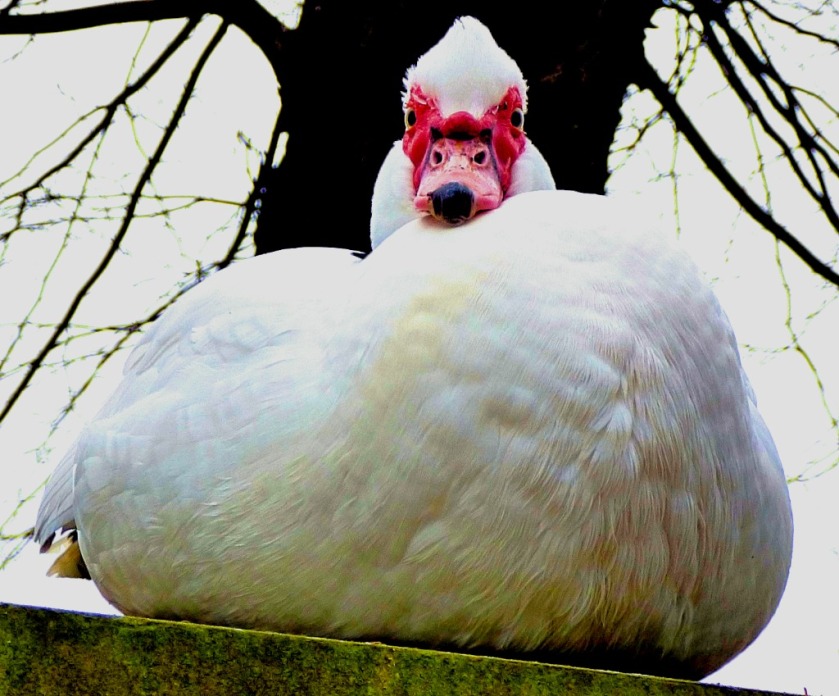