Continuing my ‘All Time XIs’ series with a look at Lancashire. There is one very controversial omission from the XI, but I hope that I have adequately explained my reasoning.

Welcome to the next post in my series of ‘All Time XIs‘. This one deals with Lancashire, and features one selection decision that is by any reckoning colossally controversial and another that will be seen as such in certain quarters. Before we move into the main body of the post however, today is the first day of ‘Autism Awareness Month’, and I therefore start with a small item that reflects that…

A GREAT TWITTER THREAD ON AUTISM BY AN AUTISTIC PERSON

This thread, from Pete Wharmby, aka @commaficionado deserves to widely read and shared. Please click on the screenshot of the start of it to view it in its entirety. 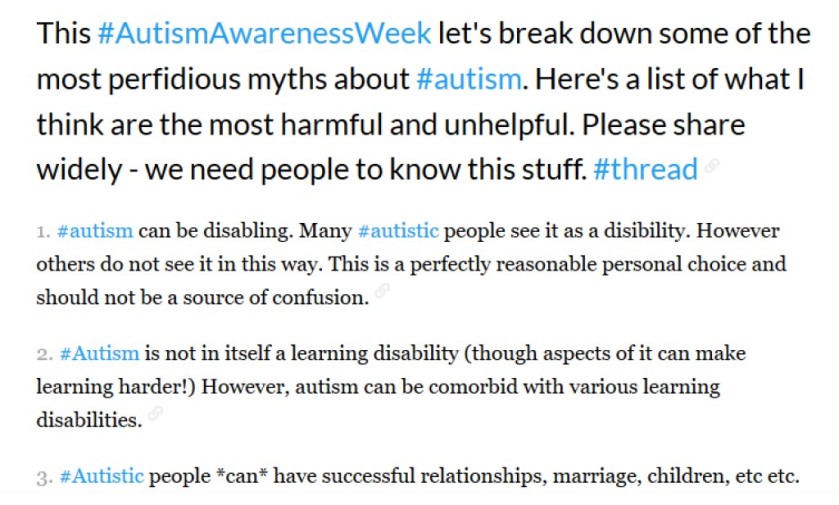 Now it is time for the main business of the day…

This team has a hugely powerful top five, an attacking all rounder at six, four widely varied bowlers and a top of the range wicket keeper to ensure that no chances go begging.

England’s all time leading test wicket taker, which is a tribute to his longevity. However his test bowling average is only just the right side of 30, and to include him would mean either sacrificing variety by dropping one of Parkin or Briggs, or dropping Statham. If I have Anderson, Statham and Barnes in the team that means Statham not getting the new ball, since Barnes would have to have it and Anderson would lose a huge amount of his value if not given the new ball.

There were a number of openers who could have been considered, starting with “My Hornby and my Barlow, long ago”, continuing with the transplanted Yorkie Albert Ward whose career highlight was his 75 and 117 in the Sydney test that England won after following on, R H Spooner whose omission probably has Neville Cardus turning in his grave, left hander Charles Hallows, one of only three players to achieve the strict feat of scoring 1,000 first class runs actually in the month of May (as opposed to in the English season before the start of June), ‘Shake’ Makepeace, Geoff Pullar, Barry Wood, David Lloyd, Graeme Fowler and Mike Atherton. Hornby was an amateur stylist, as was Spooner, and MacLaren was also an amateur with a rather weightier record. Barlow, though his left arm medium pace could also have been a useful addition, was an absolute stonewaller (twice spending two and a half hours over scores of 5, and on another occasion taking 80 minutes over a blob). All of the others would have their advocates, and only Atherton has a big black mark against him – his negative attitude to county cricket as conveyed in his writings since his retirement (hence why, unlike in the case of Anderson, I do not personally see his omission as in any way controversial).

Among the middle order batters Neil Fairbrother is the most obvious non-overseas omission, along with John Crawley. However, neither of those two really delivered at the highest level, and although Fairbrother holds the record for the highest score in a first class match in London (366 at The Oval in 1990), that innings was played on a pitch of mind-numbing flatness. Ian Greig of Surrey, no ones idea of a great player, scored 291 on that same pitch. Clive Lloyd could easily have had the nod as an overseas player, although I am normally disinclined to choose batters for that as will now be obvious to anyone who has followed this series.

I could find no way of fitting in Wasim Akram (left arm quick, attacking left handed bat) unless I had gambled on him batting as high as six and had dropped Flintoff for the sake of greater variety in the bowling department. I felt that having bitten one king sized bullet by leaving out Anderson dropping Freddie was going too far.

There were three spinners who entered my thoughts but who I could not accommodate, leg spinner Richard Tyldesley (unrelated to the two Tyldesleys already in the side), off spinner Roy Tattersall who had the misfortune of overlapping with Jim Laker (see my Surrey team) and Malcolm Hilton, who has a niche in the history books, because playing for Lancashire v Australia in 1948 he accounted for Bradman in both innings, but he does not quite have the overall weight of achievement to displace Briggs.

That brings to an end this section of the post. Feel free to comment, but remember to consider how your chosen selections might fit into an XI and which of mine you would displace.

12 thoughts on “All Time XIs – Lancashire”