A brief account of my illness, treatment and fledlgling recovery from cancer. 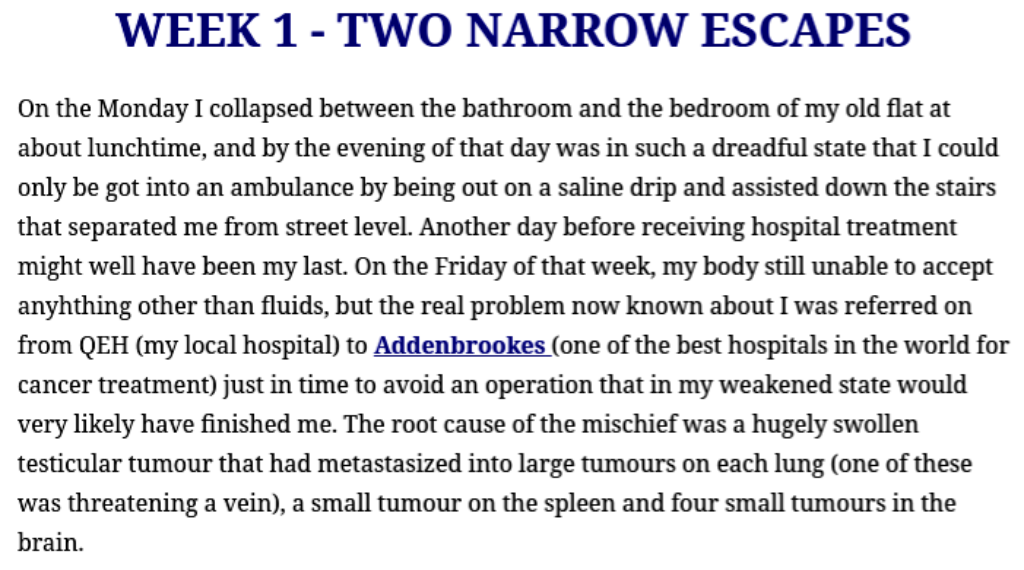 I have been undergoing treatment for cancer under the aegis of Addenbrooke’s Hospital, Cambridge for over two months, and today is the first time sime I started receiving hospital treatment that I have been online (I have done a massive bulk delete of accumulated emails and will now start paying proper attention once again. In the rest of this post I will set out a rough timeline of events over the course of this illness. Unusually for one of my posts there will be no pictures.

On September 29th I attended the wedding of a cousin in Sheffield. This was the last occasion on which I recall feeling truly well. During the following week I became noticeably ill, on on the Friday I left work early (an almost unheard of thing for me) because I just could not go on. On Saturday morning I cried off an intended visit to my mother at Godalming where she has recently been working because I was too ill to even consider it. On the Sunday evening having not ingested anything other than water since Friday I projectile vomited and realised I was in serious trouble, although not as yet just how serious.

On the Monday I collapsed between the bathroom and the bedroom of my old flat at about lunchtime, and by the evening of that day was in such a dreadful state that I could only be got into an ambulance by being out on a saline drip and assisted down the stairs that separated me from street level. Another day before receiving hospital treatment might well have been my last. On the Friday of that week, my body still unable to accept anyhthing other than fluids, but the real problem now known about I was referred on from QEH (my local hospital) to Addenbrookes (one of the best hospitals in the world for cancer treatment) just in time to avoid an operation that in my weakened state would very likely have finished me. The root cause of the mischief was a hugely swollen testicular tumour that had metastasized into large tumours on each lung (one of these was threatening a vein), a small tumour on the spleen and four small tumours in the brain.

WEEKS 2-9 – IN PATIENT AT ADDENBROOKES

I accepted the opportunity to be part of a clinical trial at Addenbrooke’s and by good fortune (and yes, I regard it as such, gruelling though the resulting treatment program was) got put into the group receiving accelerated treatment (chemo on a two-week rather than the usual three-week cycle). I am pleased that my treatment will have contributed in a small way to the advance of medical science (similarly I was delighted to be of assistance to student nurses and doctors when they accompanied their mentors – why wouldn’t I want the NHS workers of the future to be better able to do their jobs?!)

My treatment consisted of five days of intensive chemo one week, followed by a dose of bleomycin the Monday afterwards (always the toughest day of the cycle) and then the rest of week 2 of the cycle quiet. I have also been on huge quantites of pills and have had many scans and x-rays to monitor progress.

Because my flat was unsuitable in several ways for someone convalescing from cancer (isolated by the stairs that separate it from street level and afflicted by damp) somewhere had to be found for me to go instead, and faced with a crisis the local council came up trumps with a bungalow just north of the town centre on an estate run by Freebridge Community Housing (the nearest there is to social housing in Tory Britain). Because the tenancy of the bungalow only became available just as I was due my fourth and last week of intensive chemo I remained an in patient until after the follow-up bleomycin which was on Tuesday December 11th (delayed by the fact that on the Monday my platelet count was too low). That same evening I was taken to my new home and became an outpatient.

I remain extremely prone to tiredness and although I walk about my bungalow with no great difficulty I need assistance to venture outside. However, I had a very long Monday at Addenbrookes, because I needed more blood transfusions (the amount of new blood I have been given in the course of this illness would send Dracula green with envy) in addition to the bleomycin, and yesterday I not only managed to stay out of bed the whole day for the first time since the illness took hold, I was also able to watch and enjoy the autism friendly performance of the Christmas pantomime at the Corn Exchange.

I am on the mend, though it will be a while before I am back to anything like my old form. My camera battery is charging and I hope to be sharing some new pictures with you before very long. My thanks to all who have waited patiently for the resumption of activity on this blog, and especial thanks to those who have read the whole of this relaunch post.

Welcome to this post about last night’s autism friendly production of Cinderella at the Corn Exchange, King’s Lynn last night. I was there because NAS West Norfolk, of which I am branch secretary, had lavished some of its money on tickets for the evening – in total some 120 people who are either autistic themselves or were accompanying autistic family members took advantage of the opportunity. No photographs today, because the Corn Exchange forbids photography in the auditorium.

Yesterday was a working day for me, and heavy traffic on the way into King’s Lynn in the evening left me with less turnaround time than I would have liked. Nevertheless, I got to the venue, which is very close to my flat, in time to take my seat, although entering the building at 6:25 for a show starting at 6:30 is not the sort of timing I generally aim for!

WHAT IS AN AUTISM FRIENDLY PERFORMANCE?

The autism friendly aspect of the show was not the only adaptation the cast had made – they infused this fairy tale with some local colour which was extremely well received. The ugly sisters had us all laughing with their moaning about the inadequacy of King’s Lynn shops. Another good locally themed joke was in a journey scene when mention was made of “making up time once we hit the A47” – anyone who has travelled along said road, which was most of the audience, realised that this was the single most fictional line of the night!

Some of the special effects were superb, the acting was excellent, and it was an excellent evening.