Showcasing some railway themed postcards I have recently acquired and unveiling a personalised roundel.

Hello and welcome to this post which focuses on some postcards I have recently acquired very cheaply at auction.

I won two lots of railway postcards at James and Sons’ last auction. The first of these lots to end up in my possession was…

Three of these cards were of London and North Eastern Railway (LNER) locomotives while the fourth was of a railway station, tentatively identified in the catalogue as Ardley. Further research on my part revealed that the station is in point of fact Ardlui, a tiny dot on the map near the northern end of Loch Lomond. Here are some pictures of the cards:

While I was pleased to acquire these cards, especially at that price, the lot that meant most to me was…

These cards had a particular resonance because I have travelled on this railway many years ago. It is a very narrow (1 ft 11in) gauge heritage railway which runs to about 40 miles.

Here is a promotional video from the official website of the Ffestiniog Railway:

Before I show the postcards, here is a link to the Wikipedia page for the Ffestiniog Railway. 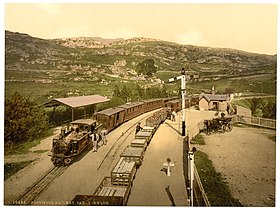 Now for those postcards, starting with the official image that everyone saw:

Now here are the pictures of these cards taken in my own home:

This is based on an autistic spectrum symbol that I found out about courtesy of Laina at thesilentwaveblog (see this post for more details). I was thinking about coming up with a suitable logo for my London transport themed website, and considered the possibility of using the rainbow infinity as the disk part of the famous London Underground roundel. If I decide to go with it, this is what my personalised roundel looks like:

One thought on “Railway Postcards and an ‘Autism Roundel’”